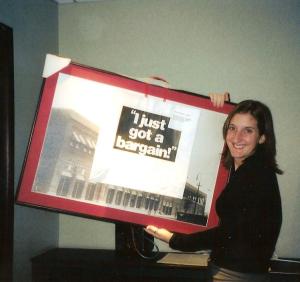 This Saturday the 2nd Annual Katie Hewson Scholarship Fundraiser is being held at McFadden’s Restaurant Saloon on 50 Front Street, Worcester.
These are the main details:

For those that do not know this is a memorial benefit for Katie Hewson who lost her life last February (2007) to a tragic accident in St. John.

The event will help raise funds for a scholarship that has been set up in Katie’s memory. Last year they held a similar benefit at the Crowne Plaza Hotel and raised $11,000 and are hoping to match, if not surpass that total.
You can read about Katie’s life and the charity (from a Landmark article) here on our class blog:
http://vivalarubberroom.blogspot.com/2007_10_01_archive.html
Should you need directions please call McFadden’s at 508-755-4339 or go to the following website:

Those who can not make it, but would like to make a donation should contact Rebecca Almonte at ralmonte11@yahoo.com

Those who have questions about the scholarship should contact Jaime Hewson at jhewson@elevationexhibits.com

Any questions about the event or if you have a prize donation, please contact Stacey Szeidler at staceyj79@hotmail.com or Laurie Gillis at lgillis@hhcc.com.

And for members, and supporters, of the Class of ’94 here is a reminder of our dominance:

(Above: Class President Mo Cheeks with Fred at a recent alumni art gala to preserve the Rubber Room)
After months of negotiating with his agent, manager and handlers, Fred finally opened up to the media in this tell-all interview, following the Columbus Day parade in Holden on Monday where Fred acted as the Grand Marshal. This is the second in a two-part series on the greatest bag that ever lived.
Q: IT’S BEEN QUITE A YEAR FOR YOU.
FRED: Not just for me, but for bags throughout the world. I think any time a bag such as myself gets recognition it can only be a plus for my people.
Until recently, bags didn’t get the respect they deserved. But without us how would people carry necessary items like shampoo, deodorant, heart burn medicine and books? With shopping carts? Too cumbersome. With hands? Too weak.
I just want us to get the respect we deserve. It’s long overdue. The days of shoving us in the closet, under the bed or in the back of the car are long gone.
Q: INDUCTION INTO THE 2008 WRHS HALL OF FAME, 2008 ASSOCIATED PRESS BAG OF THE DECADE, COMEBACK BAG OF THE YEAR IN 1993, 1994 MOST VALUABLE BAG, ALL-STAR BAG TEAM 1990-94. WHAT DO THESE AWARDS MEAN TO YOU?
FRED: Look man, I’m not in this for personal recognition. Never was. The awards are nice, but I just want to do my job. I don’t display them or nothing. I keep them in a closet.
You have to understand, this is bigger than me. This is about the Class of ’94. I’m just glad to be a part of something special.
Q: BUT YOU CAN’T SAY YOU DON’T ENJOY THE PERKS.
FRED: Last night, I was sitting on the first baseline, two rows behind the Red Sox dugout when they beat the Tampa Bay Devil Rays in game five of the ALCS. Two out, Youk on second, J.D. Drew at bat, 3-1 count. I was on the edge of my seat.
I admit I never would have been at the game if it weren’t for the things I’ve done in my life. But it also comes with the territory. Being a member of the Class of ’94 has its privileges.
Q: DID YOU GET A CHANCE TO GO INTO THE CLUBHOUSE AFTERWARDS?
FRED: I signed some autographs for Big Papi. Got a pic with Pedroia and chatted a bit with Beckett. They sprayed champagne on me. It was pretty remarkable. You could see the intensity on their faces.
Q: WHEN YOU ARE IN THE LIMELIGHT LIKE THAT DO YOU EVER HAVE THE TEMPTATION TO MOVE ON?
FRED: I’ve had my chances before. I was on set as a consultant for Spike Lee on “Inside Man.” I worked with three other bags used in the bank robbery scenes, trying to show them how a bag would act in that situation and how much money they would hold.
On one of the first takes, Spike had them full of cash, about $300,000 each, but I told him that much weight – no matter what kind of bag you are – would tear at the seams. It just wasn’t feasible. Thanks to my advice we reshot that scene, added a fourth bag, and each bag had a more realistic $200,000.
When the movie wrapped, Spike asked me if I would work with him on his next film. The money was great, but I turned it down.
Just last night Papelbon asked me after the game if he could bring me with him to Tampa. I would be carrying his uniform, including his jersey, mitt, cap. You name it. He’s a future Hall of Famer. I declined.
I’m way past those days of living life in the fast lane. Now I’m more comfortable doing charity events like pounding some flesh at class reunions, taking pics at alumni events and speaking at Homecoming to the younger bags about the dangers of drugs and alcohol.
Q: WHAT KIND OF BAG ARE YOU?
FRED: A big bag.
Q: WHAT DOES THAT MEAN?
FRED: Give me anything and I can hold it.
Q: WHAT IS THE MOST YOU’VE EVER HELD?
FRED: 17 hardcovered textbooks, 3 paperback books, a Sony Walkman, a fake mustache, soccer shinguards, a frisbee, a discus, eye black, Binaca spray, Mr. T Halloween mask and a bunson burner. About 78 pounds. That was a typical day for me.
Q: WHAT IS THE STRANGEST THING YOU’VE EVER HELD?
FRED: Dana Gray’s hair.
Q: THAT WAS AFTER HE LOST TO LARRY RETTIG IN THE 40-YARD DASH JUNIOR YEAR.
FRED: I was the finish line.
Q: WHAT HAVEN’T YOU DONE?
FRED: Lost. That’s why I think it was fate that I became a part of the Class of ’94.
Q: I KNOW THIS IS TOUGH FOR YOU. BUT CAN YOU TALK ABOUT THE DAY YOU SAVED CHICO’S LIFE?
FRED: Next question.
Q: THERE ARE RUMORS YOU ARE WASHED UP.
FRED: I don’t respond to rumors. You want to put a book in me, put a book in me. Just don’t insult me.
Q: WHAT IS NEXT?
FRED: When and if I go, I’d like to be cryogenically frozen and placed in a display case at the entrance of WRHS. I am donating some of my parts – my zipper, a few stitches – to science so future generations can learn from me.
I live by the mantra: if we don’t learn from history, we are doomed to repeat it. I think that’s why I’ve been so successful. And I hope the bags that grace the halls of Wachusett once I’m gone can learn from me as I have learned from those that have gone before me.