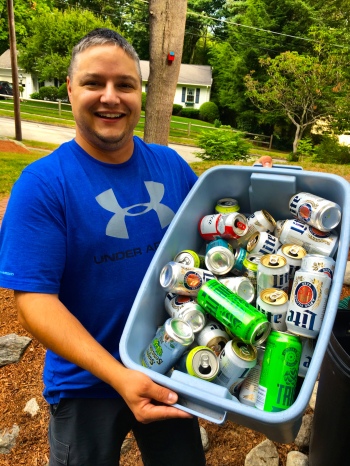 Jooones has been seen around town collecting cans to cover the costs for our next reunion.

Since Chris “Trem Daddy” Tremblay shocked the world by winning The Reunion King Title at our Lucky 21, Dave “Jooooones” Laidlaw has dedicated his life and blood to our class. “It’s all I have,” he said with tears in his eyes. “Class of ’94 made me. And now I have to return the favor.”

While Trem Daddy has been seen criss-crossing the globe in private jets with Rettig and Pirani, Jooones has returned to his roots.

He laid out his daily regimen in detail during an exclusive interview with www.BestClassEver.net. In the morning, Joooones gets up early and drives to the WRHS parking lot in his mint green ’87 Chevy Camaro IROC to watch the sun rise. “I’m usually blasting Ace of Base or C+C Music Factory,” Jooones said. “That music gets me in the zone. Once the sun is up, I spin some circles and burn rubber in the parking lot before I do some real damage.”

Joooones then dedicates the next 12 to 14 hours of the day to scouring the Wachusett district for redeemable cans and bottles. His goal is simple. “I want to collect enough so all my classmates can get into the next reunion for free,” he said, his voice trembling with emotion. “If not now, when? If not me, who? The time is always right to do what is right.”

Since our last reunion in November 2015, Joooones has collected $22.80 in recyclables. “What has Trem Daddy done? Nothing,” Jooones said. “Meanwhile, I’m giving back. I’m making sure no one has to pay to get into our next reunion.”

Class Officers refused to comment on Joooones’ good deeds, though off the record they hinted this could vault him back into the running for The Reunion King crown which narrowly escaped his grasp three years ago. “Right now, he’s definitely ahead of Carbs,” class mathematician Tricia (Hogan) Burdo said.

As to whether Joooones can collect enough recyclables to achieve his goal is unclear. Conservatively, Burdo estimated that Joooones would have to turn in 50,000 cans and bottles to cover the entrance fee for 100 classmates at $25 per person. “Frankly, he hasn’t collected enough for one person,” Burdo laughed.

Joooones refused to let the naysayers stop him. “Look, here’s another one,” he said, as he picked through the dumpster at Goodhile’s in Holden, proudly holding up an empty of Mike’s Hard Frozen Mango Lemonade. “Each one of these that I find, the less my classmates have to pay. I’m not doing this for myself or for the glory, although both of those are awesome. I’m doing this for Chico, Dr. Pandiscio, Coyle, and all the legends that have gone before me. I’m doing this to thank them for paving the path to greatness, and for making our class the best ever.”